About a month ago, I blogged about my love/hate relationship with Eclipse. I was asked by a few people to share my tips on how I was able to speed it up so here we go… As a side note, this article is not about comparing IDEs, please refrain from displaying your hate for the IDE or your preference for another…  This post is just about optimizations that help Eclipse run faster for those who use it. I’ve described each tip for Windows, Linux and MacOS users. Once you have gone through all the optimization tips, Eclipse should start within 10 seconds and run much smoother than before.

[edit]: most of those tips will speed up your Eclipse experience, not just the startup time. Classes will open faster, jumping from one definition to another will be faster. Viewing method javadocs will be faster… Unfortunately, none of that can be timed precisely so there is no specific benchmark about the actual speed gains for each tip.

Note: I assume that you already have an SSD and at least 8Gb of RAM. If not, look no further for performance boosts…

More often than not, every new JDK and Eclipse version includes fixes and optimizations from previous versions. Make sure that you are using the 64 bits version of Eclipse and of the Oracle JDK. For any web development, you will want to use Eclipse for Java EE and not Eclipse for Java.

Place Eclipse and your code on your SSD.

I personally turn off autosuggestions so that they don’t slow down my typing. Instead, I manually trigger the auto suggestions using Ctrl+Space when needed. This is done through:

A RAM disk is a virtual disk or hard drive that is stored into the computer’s memory. It boosts the I/O performance on anything that is on it. Creating a RAM disk uses your RAM even though it just appears as a drive on the computer. Because the memory used will be reserved for the disk and become unavailable for other programs, we will only be putting the JDK on there. 300MB will be enough.

Warning: Don’t put anything permanent on the RAM Disk we will create as it will be erased/recreated at each reboot.

Step by Step for Linux users:

Everything is described here already

Step by Step for Mac Users:

The RAM Disk is created with the diskutil tool:

1. Create a new batch file, for example: ~/tools/batch/ramdisk.sh
Replace x, y, and z with the JDK version you have installed on disk:

2. Save your file and make it executable:

You should now see in Finder the new device called JDKRAMDISK containing your JDK. You can remove the RAM Disk and free its memory by clicking on the Eject button:

Note that if you follow this tip, you will always need to have the RAM Disk in order to launch Eclipse (otherwise you will see the error “A Java Runtime … must be available in order to run Eclipse”). You can configure your system to run the ramdisk.sh script automatically upon startup using Automator or using a launchtl daemon.

Step by Step for Windows Users:

2. Create a new batch file, for example: C:/tools/batch/ramdisk.bat
Replace x, y, and z with the JDK version you have installed on disk:

By running ramdisk.bat, you will have created a new disk N: labeled “JDK RAMDISK” that will contain your JDK.

Note that if you follow this tip, you will always need to have the RAM Disk in order to launch Eclipse (otherwise you will see the error “A Java Runtime … must be available in order to run Eclipse”). You can configure your system to run the ramdisk.bat script automatically by placing the script into your Startup folder.

In order for Tip 3 to work, you will need to add the -vm setting in eclipse.ini (see next section)

This is one of the most confusing areas of Eclipse optimizations. There are thousands of online articles preaching different configurations… I’ll just describe the way I tweaked my options and add more to the existing confusion 🙂

To understand those options require just a bit of vocabulary on Oracle’s JVM. Basically, the JVM memory is divided into multiple memory pools where objects reside with time: 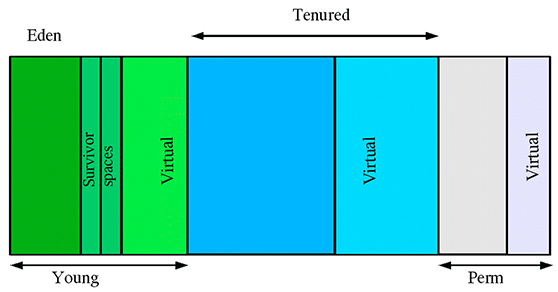 In case you are interested, Oracle wrote a great article about garbage collection tuning, detailing all those spaces and roles

The sizes for all those memory pools can be tweaked in eclipse.ini. I have 16Gb of RAM, but these settings will work fine with 8Gb of RAM.

use the JDK stored on the RAM Disk (use the version according to what you did in Step 3):

This basically skips the verification of class files (described in http://docs.oracle.com/javase/specs/jvms/se7/html/jvms-4.html#jvms-4.10), meaning that the JVM won’t be able to detect the authenticity of the class files you are using. This poses a security threat if the compiled files have been altered. Use at your own risk. (I use that option for hobby projects but not at work)

set stack size for each thread

And finally, here are some other options that you may see online… Personally I didn’t notice much of a boost by using any of them so I’m just stating them for info. You can look at the doc reference to know what they correspond to and then play with them:

Finally, remove all the duplicates as well as launcher.XXMaxPermSize which is useless with the option XX:MaxPermSize.

Tip 5: Get your anti-virus outta here

If you have an anti-virus, make sure that it doesn’t interfere with your code folders. Add the JDK folder, the Eclipse folder, your .m2/jar repositories, and your code folders to the antivirus whitelist.

Tip 6: Keep SVN and GIT out of Eclipse

This is really a matter of personal preference. Some will like the Eclipse integration with the collaborative team tools. Personnally I find them slow, I’d rather have Eclipse concentrate on the dev task than try to do too many things at once… I’m also a sucker for the SVN/GIT CLIs… Anyways,  I removed the integration with Eclipse and found it much more responsive.

Tip 7: Use your keyboard

One of the perks of Eclipse is the trumendous amount of keyboard shortcuts it offers. You can remap them if you are used to other schemes. I usually remap my debugging keys for ex. so that they match the ones in VIsual Studio &  Chrome Dev Env. Take some time to learn them. The less your hands leave your keyboard, the faster your Eclipse experience will be!

I won’t go into details about which shortcuts to know but you can easily find that information online. Just thinking about it, a few must-know shortcuts come to mind:

This pretty much wraps it up! Without comparing Eclipse to any other tool out there, I find that it can be a very powerful and fast tool to write java code with.

If you have any other tips, I’d love to hear about them!